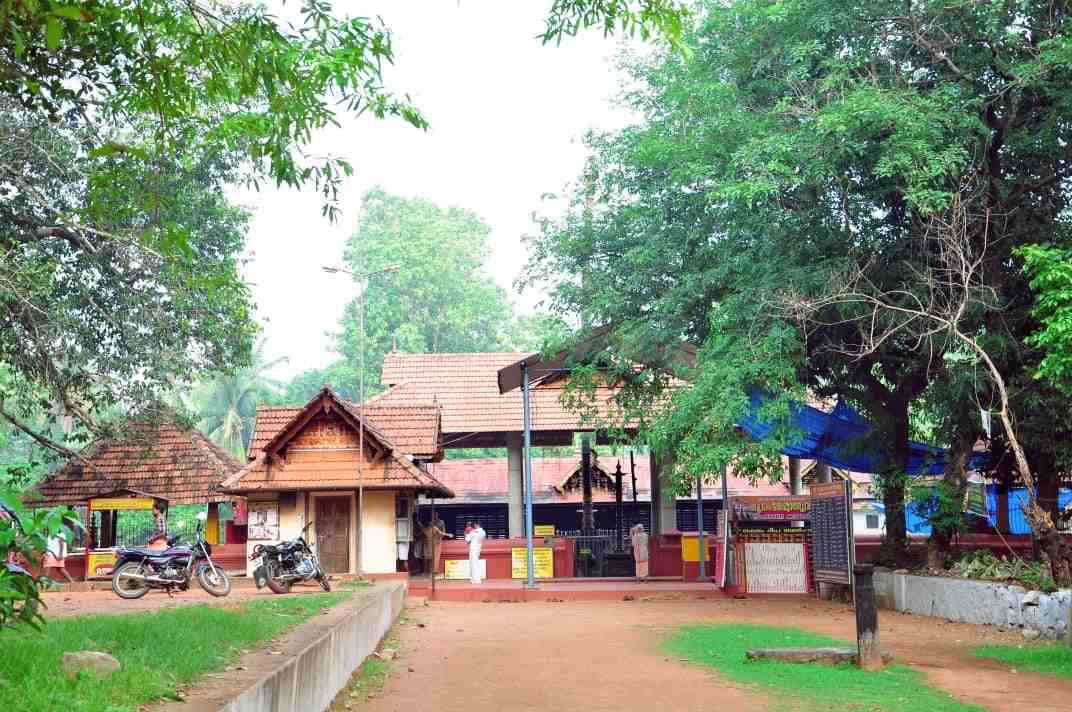 Lokanarkavu (or LOKAMALAYARKAVU as was known) is a temple village, a part of Memunda area in Villiappally village, Vadakara Taluk Kozhikode District. The temple complex situated about 5 KM east of Vadakara town Proper road facilities are available to the temple complex.

Lokanarkavu temples are very unique as three principal deities are housed in separate temples in a compound. All the three temples are of principal deities, with separate sanctum sanctorum, outer sanctorum, rituals, festivals etc. The deities are of Vishnu, Parasakthi, and Siva in sequential order of their age. Vishnu temple in its present form may be 2000 years old, while the Bhagawathi temple is approximately 1300 to 1500 years old. Siva temple is relatively newer,. approx. 400 years old. 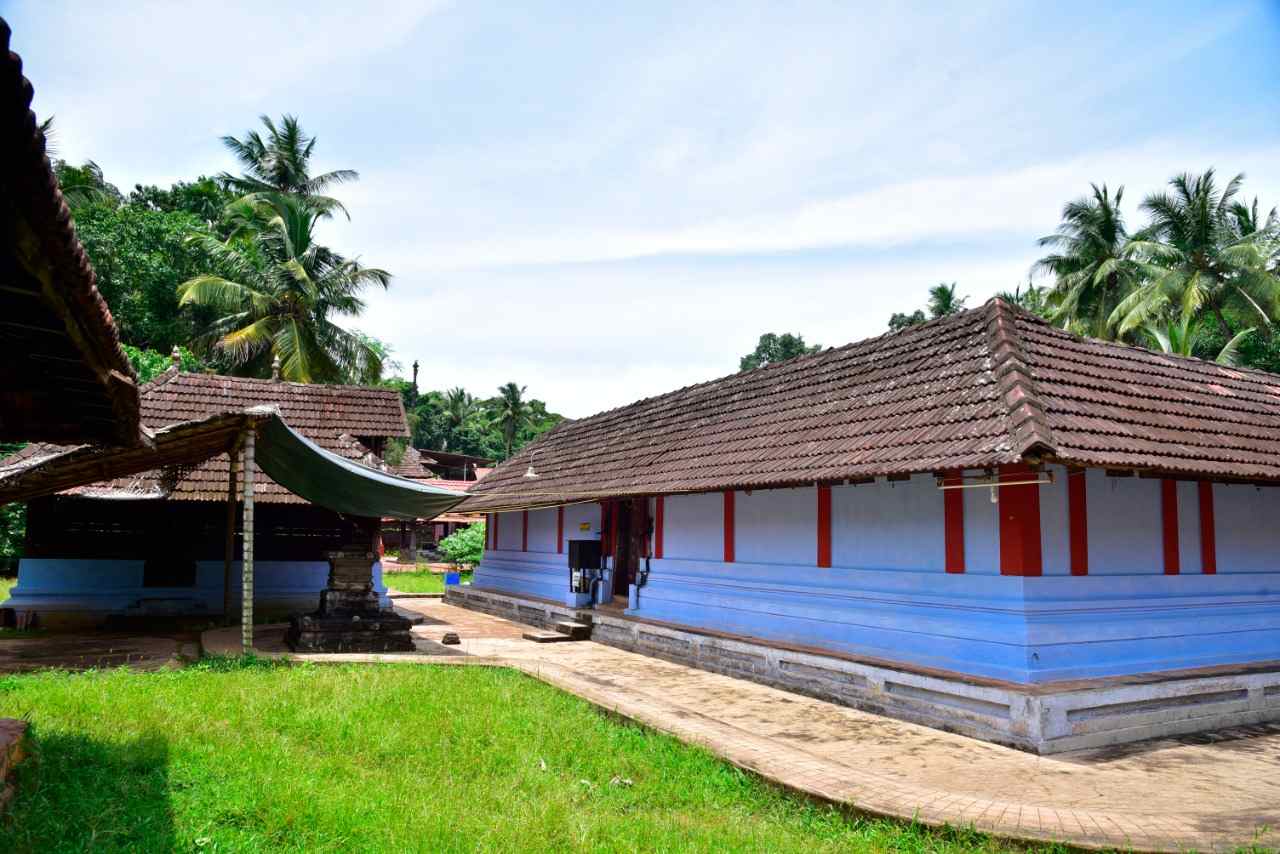 To start with, we talk about Vishnu temple, the oldest of the three. The Vishnu idol is very unique and rare, as the idol stands with the right foot placed in forward mode. It is believed that the idol was sanctified and enshrined by none other than Lord Parasurama. The temple (then the lone temple of the area) was administered by Kamukara Bhramins(Tulu/north Canara origin). The temple was very prosperous with its own pond, oottupura, koothambalam etc. When time passed, Goddess Bhagavathi temple was constructed adjacent to the Vishnu temple and as a result, the importance of Vishnu temple got diminished. It is a known saying that if a Parasakthi temple is erected next to a temple of another deity, the importance of such temple dwindles. When the Kamukara Brahmins (the administrators of Vishnu temple) realized that the founders of Bhagavathi temple are affluent and loyal to their mother Goddess, sincere in their approach to temple rituals, they handed over the administration with movable and immovable properties of the Vishnu temple to the 'migrant Nagariks' to run the Vishnu temple. Eventually, the Kamukara Brahmins left the place. The place then had only two temples and the"Nagariks" ran the temples delightfully. 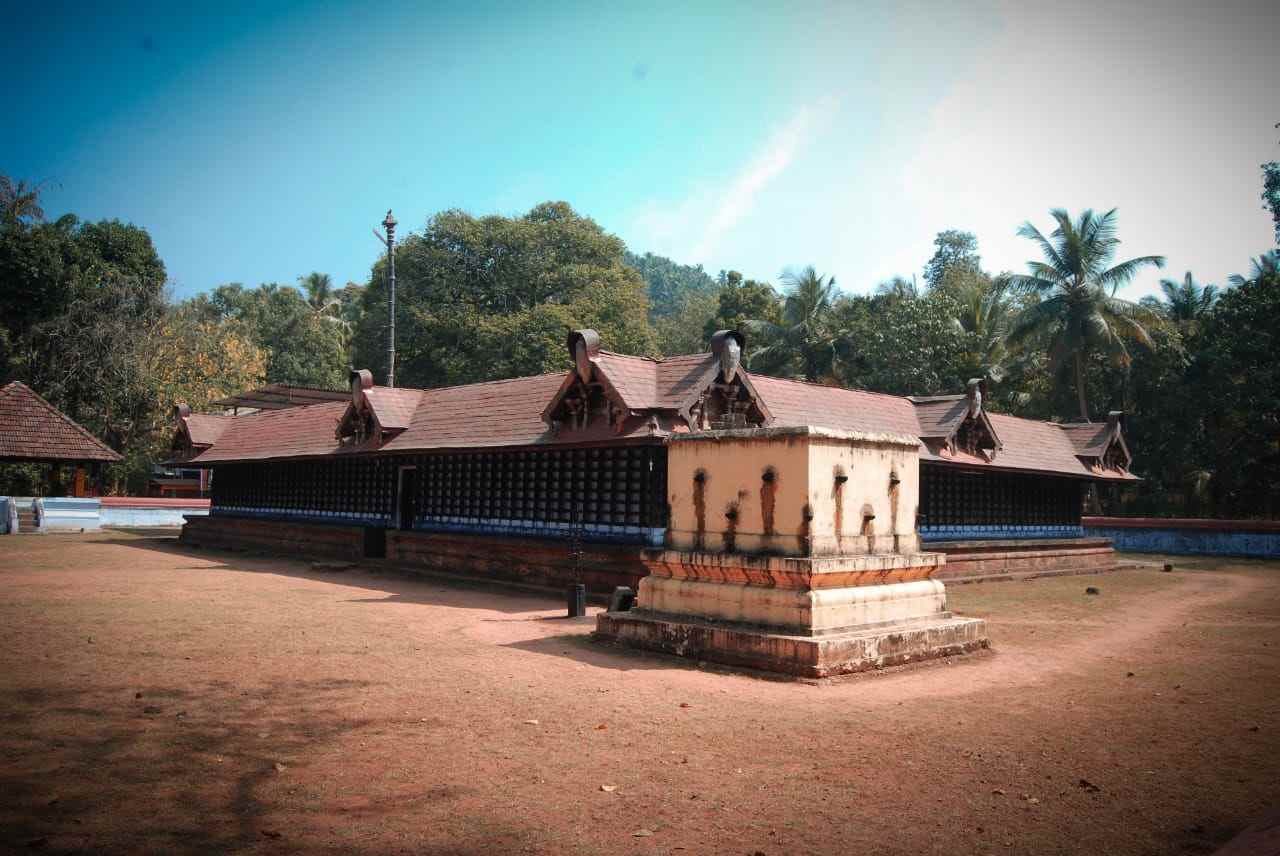 As explained in earlier para, one of the principal deities is of PARASAKTHI, the Mother (AMMA) Goddess of devotees. The Amma Goddess was worshipped as their family Goddess by the founders, who were migrant businessmen, known to local people as "Nagarakkar" or Nagariks,meaning people from town. These group of migrant businessmen were of Vysya class with interest in trading with Egypt, Arabia, China etc..They were specialists in trading of Silk, Gold, Diamonds, Spices etc and were owners of their own shipping facilities. Originally from the Sindh region of India, they travelled down to Kerala coast, considering the proximity of sea ports and availability of spices in the Western coast, they settled at Kollam (Quilon) and named their area of settlement, Lokamaleswaram. They were sincere to their trade and loyal to their AMMA Goddess. Owing to some reason (expand business?), from Kollam, they moved on to Kodungalloor, where better sea port facilities were available then. The settlement was again named Lokamaleswaram. In their quest of expanding business (or was it a rift with the Ruling family?), they moved on northwards and arrived at Vadakara, which had also sea port facilities with good business relation with foreign countries dealing in Copra and spices. A story is heard that part of the group had settled at Panthalayani (Koyilandy) naming the settlement as Kollam. Kollam now is a prospering town in Koyilandy Municipality and the group of people had their own AMMA goddess Shri Pisharikavilamma. It is also read that another part of this group had sailed to Colombo and settled there.Now, coming back to the group arrived at Vadakara (Kadathanad), they found their abode at Puduppanam area, served by river mouths and water subway acceptable and business started flourishing. The story goes on to say that the jealous locals did not approve the sincerity and loyalty of the "migrant" people and somehow wanted to tarnish them.
The issue got bigger and some locals accused one among the Nagariks of immorality. Immorality was one of the abhorred crimes as far as the Nagariks were concerned. The Nagariks were strictly monogamous and were following the essential ethics associated with nobility in the North Indian Aryan community. So the accusation of immorality brought the greatest disgrace and dishonour to the community as a whole. The accused person's allegiance to the community was held in suspect. However this person was innocent and felt humiliated in front of his community due to all these incidents. The policy of the Nagariks at that time and for many hundred years after, strictly stood against mixing up with any local community. So this innocent, insulted Nagarik was forced to commit suicide. He jumped into the Mooradu river and committed suicide. At that time he cursed the region of Puthuppanam, that it will never rise to true glory. It is in memory of him the 'Pidivilakku' is brought in procession to the temple on all auspicious days. 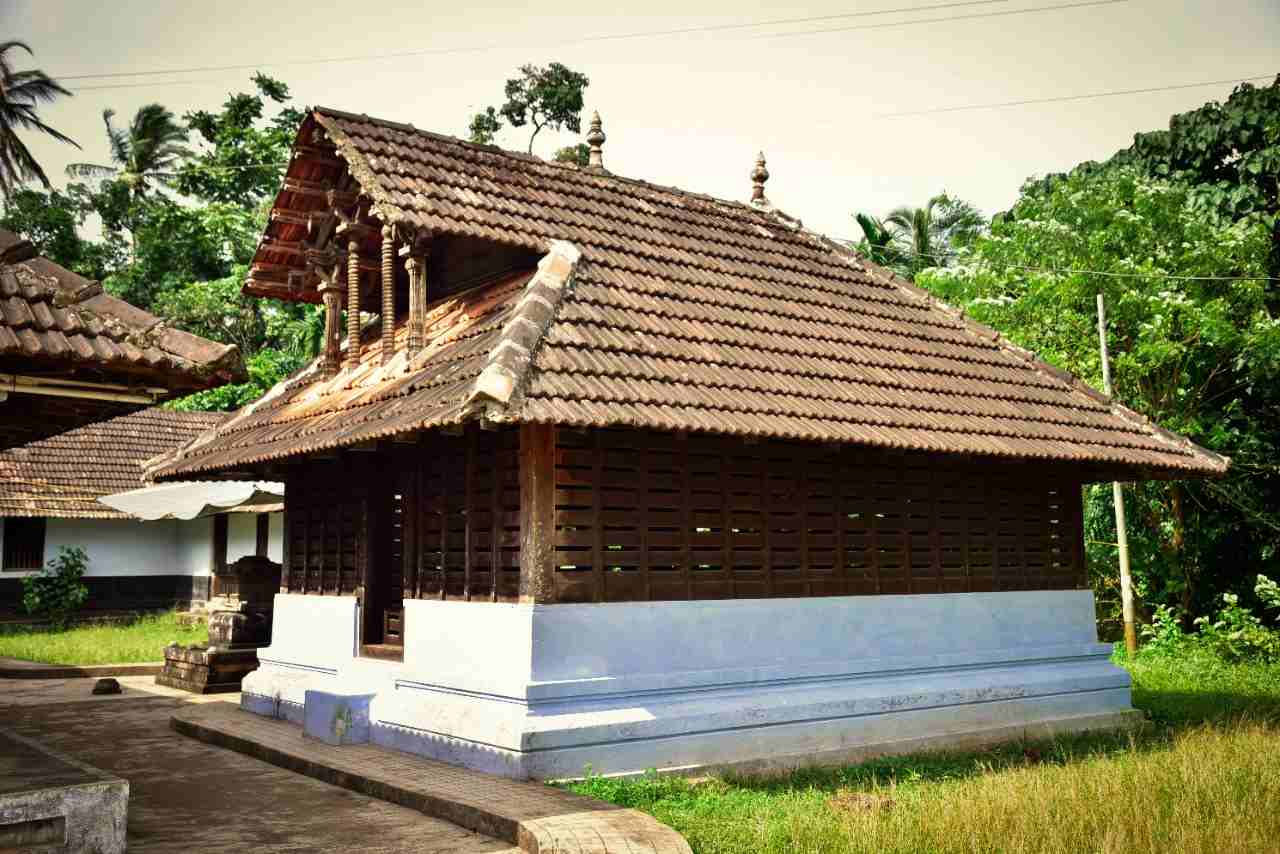 The Nagaríks were very unhappy and wanted to evacuate the place. On a fine morning, under the leadership of the Karanavars(Chieftains of the group), they travelled eastwards and arrived at Memunda where a 'Nattukoottam' (Generalbody meeting of the residents of the area) was being held. The Karanavar requested the Chief of Nattukoottam to allow them to settle in their village, at the behest of their family Goddess who travelled with them. Before answering the Karanavar's request, the Chief enquired about the lone mother travelling with them. The Karanavars and group members then realized that AMMA Goddess was travelling with them to locate a suitable place for her "offsprings" to settle. The Chief and members of the Nattukoottam were notified of the presence of AMMA Goddess and they prayed with folded hands and tears in their eyes. They then eagerly allowed the Nagariks to settle wherever they liked. At this time, Amma's command to the followers was heard clear & loud directing the Nagariks to go to the nearby hilltop and send an arrow. Amma commanded that she will sit where the Arrow falls. Chanting and singing praising songs of Amma, the group and the Nattukoottam travelled to nearby Kotakkat Mala, from where the Chief Karnavar sent an arrow. The arrow was pierced on to a jungle tree (nameless tree; perariya maram as per thottam pattu) and the Goddess encompassed on the tree, which remains till today as the "MOOLA PRATHISHTA" (original idol) of the Bhagavathy temple. This event is being celebrated now as the Mandalam 16 vilakku conducted by the descendants of the founders, the Nagariks. To symbolize the event, a group of youngsters (to represent the Nagariks and Nattukootam) travel up to Kotakkat Mala and crack 11 Kathinas (metallic canisters) to declare the arrival of Amma Goddess and return to the temple joyously to celebrate the other spectacular events of the day. 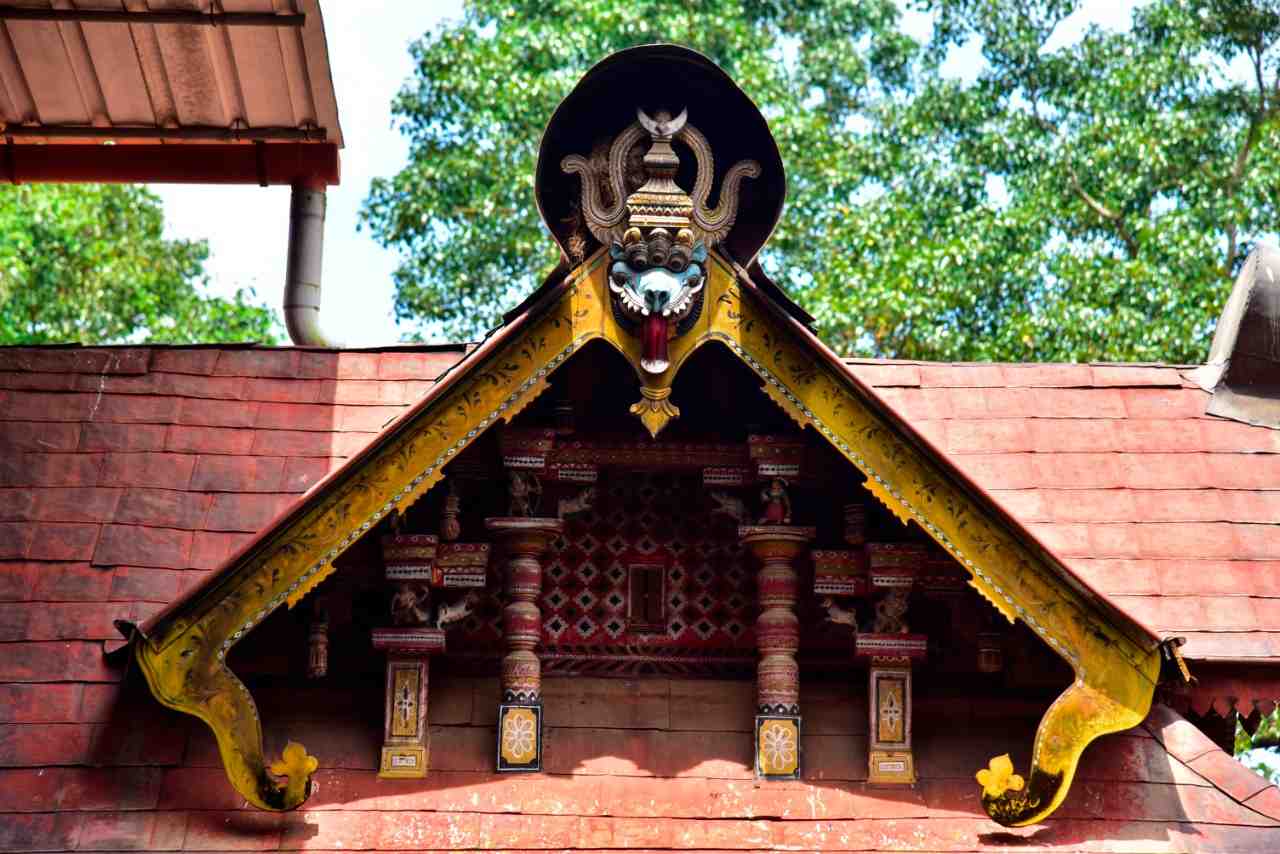 With the blessings of Amma - Goddess Lokambika - business of the Nagariks flourished resulting in lesser and lesser time spent on the affairs of the temple. The Manager of the temple, Nelliyot Mooss, looked after the affairs of the temple profoundly.As the Mooss got older he requested the temple owners to relieve him of his temple duties. At that time a member of the Kadathanadu ruling family requested the Mooss to get him nominated as Manager. As he increased his pressure on Moossathu, the old man recommended him to the Nagariks. The Nagariks,with their full faith in Nelliyot Moossathu, entrusted the responsibility to this member. In course of time the temple came to be under the control of the ruling family of Kadathanadu.

With passage of time, the Nagariks realized that temple administration was in jeopardy and temple properties were lost.The Nagariks by then, became weaker in their trade and position in the society, asked the Raja to return the temple and properties. The Raja, by then a true British loyal, refused to return the temple. A civil case was filed at District Court and Madras High Court, but as sufficient evidences could not be submitted, the Nagariks claim was not accepted, but the learned Judges re-iterated the stand of Nagariks and confirmed that Kadathanad Raja was only a "manager of the temple and not the owners or ooralans. The court ordered that the temple be administered by the HR & CE board, a Government Agency of then Madras Government, allowing Kadathanad Raja to have hereditary trusteeship. Eventually, Kerala State was formed and the temples in the then Malabar District were put under HR&CE board of Kerala Govt, which later became Malabar Devaswom board. Although the descendants of the founder Nagariks were not able to get the administration of the temple back, their hereditary rights and privileges in the temple rituals were protected. That are being adhered to at the pleasure of Lokambika, even in the present days. 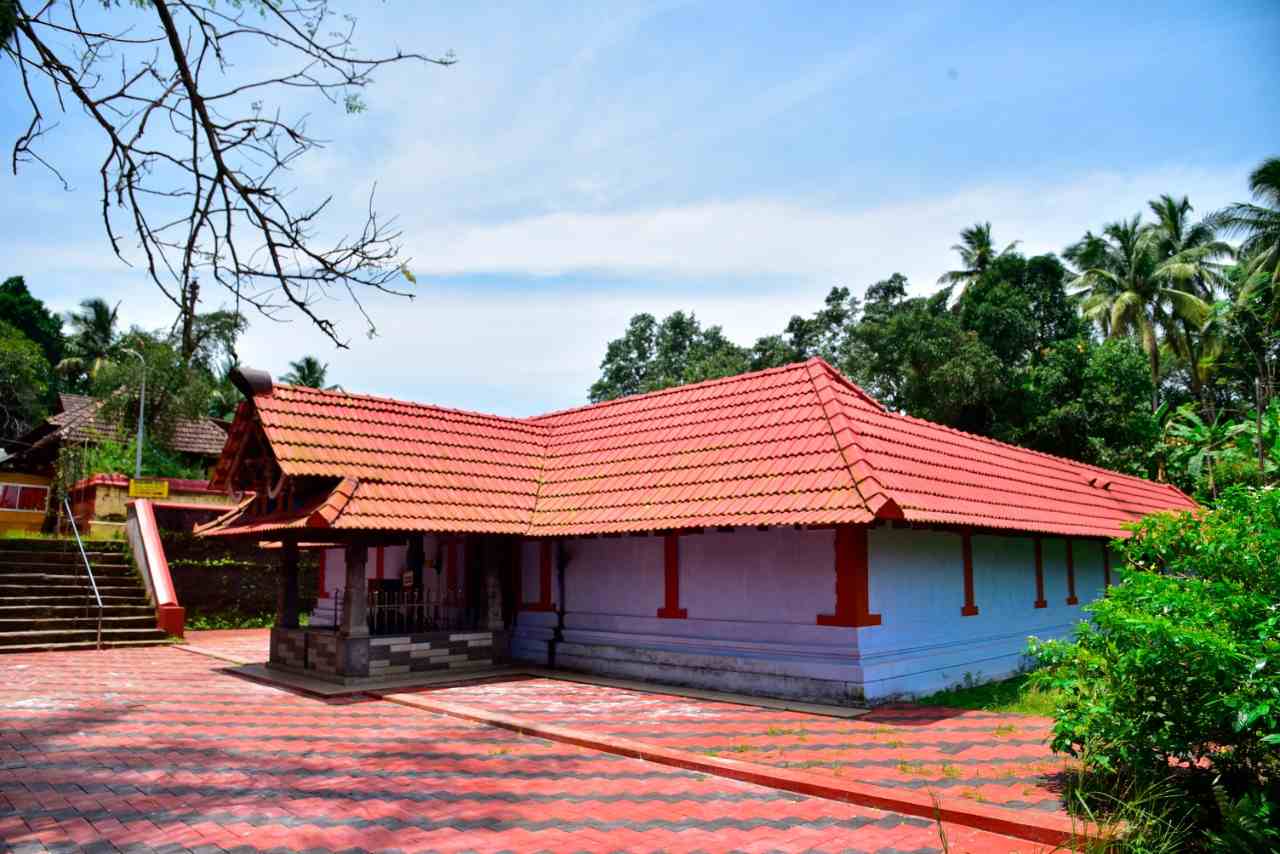 The history of Siva temple is so brief that the Puduppanam Vazhunnavar (Puduppanam village Chief) had Initiated the establishment of Siva temple around 300 - 400 years ago, with the concurrence of the Nagariks and Kadathanad Raja, in between the space available between Vishnu & Bhagavathy temple. The Shivalinga enshrined at the temple was retrieved from a ruined Siva temple elsewhere.
The Bhagawathi or Lokambika as is universally known is one of the four Ambikas, the other three, being. the famous Kollur Mookambika, the famous Hemambika (from where late Mrs Indira Gandhi choose her party's symbol, the palm) near Palakkad, and Hemambika, again, at Kanyakumari, It is also heard Kodungallur Bhagavathi and Chottanikkara Bhagawati are Lokambikas. At Lokanarkavu, Bhagavathi is worshipped in three different forms, in the morning as Saraswathi,the Vidya Devatha, at noon as Lakshmi Devi, devatha of wealth, and in the evening as Bhadrakali,siva's daughter, the destructor. 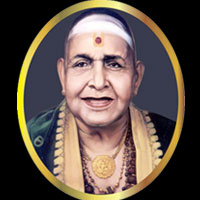 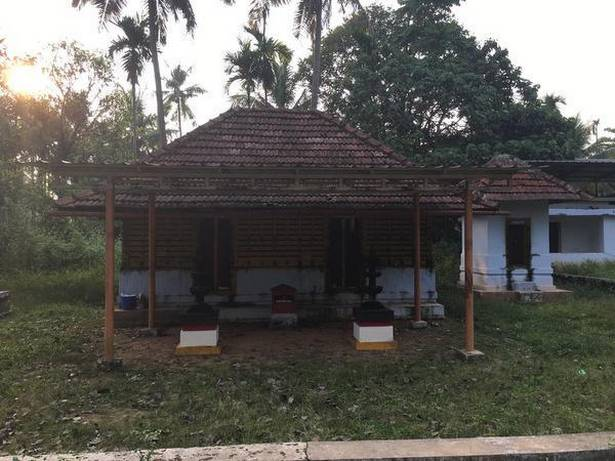 Legends like famous martial arts warrior Thacholi Othenan, Carnatic Music maestro Chembai Vaidyanatha Bhagavathar etc were ardent devotees of Amma Bhagavathi. Othenan's birth place was 'Meppayil' 2 kilometer away from Lokanarkavu. Othenan days start with Devi darshan at Lokanarkavu and it is often said that wherever Othenan went, for good or bad, Amma always stood with him. Chembai Vaidyanatha Bhagavathar was born (his mothers house) in Lokanarkavu area and spent his childhood at the courtyards of the temple He learned his first music lessons at Ammas' thirumuttam(temple courtyard) witnessed by Omnipresent Shree Lokambika.